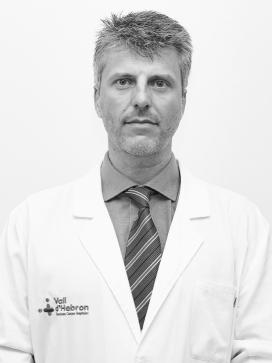 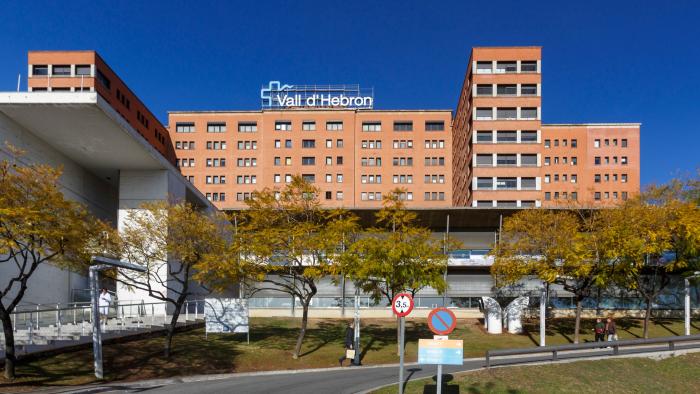 A tumour is an abnormal growth of tissue. In the case of orbital tumours, this growth is located in the tissues around the eye, which may be muscles, bones, fat, the lacrimal gland, nerves and blood vessels. They are rare tumours of several different types that may appear at any age. Orbital tumours may be benign or malignant. Benign tumours may cause pain due to compressing or displacing the different structures in the eye socket. Malignant tumours, on the other hand, as well as spreading to neighbouring tissue, may produce metastasis in other unconnected organs or lymphatic nodules. 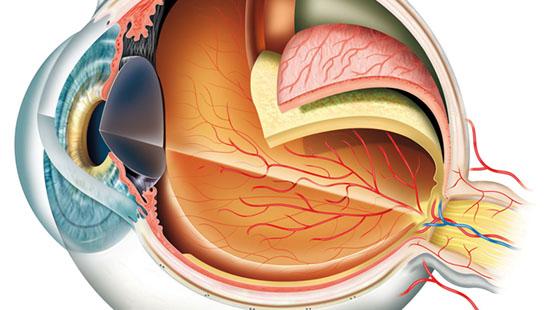 The most common symptom is a protrusion of the eyeball out of its socket, known as “exophthalmos”. However it can also cause loss of vision due to compression of the optic nerve, double vision, pain and can limit the movement of the eyeball.

In some cases, tumours may be present in the eye socket for an entire lifetime with no symptoms.

Who do orbital tumours affect?

It is hard to know the exact number of people affected by orbital tumours as it is a rare kind of tumour that includes several variants.

Benign tumours are the most common; capillary haemangiomas and dermoid cysts in children, and cavernous haemangiomas in adults.

The most common malignant tumours in children include rhabdomyosarcoma, and in adults lymphoma cancers of the lacrimal gland and metastases.

Imaging studies (CT and nuclear magnetic resonance scans) allow precise location of the tumour, its size to be measured and certain biological characteristics to be known. This information, together with the patient's age and the speed of the tumour's growth, enables an initial assessment of whether or not it is malignant.

A definitive diagnosis is made after a biopsy of part or all of the tumour.

In most cases, the main treatment is surgery to remove the tumour and therefore avoid the damage it may cause if left to grow within the eye socket by compressing or displacing the eyeball and other structures.

Modern-day orbital surgery techniques allow extraction of the tumour by making small incisions in areas that are hidden or not very visible. This enables faster postoperative recovery.

In the case of malignant tumours, different combinations of surgery, radiotherapy and chemotherapy are used. It should be noted that regular check ups are needed after treatment.

Where there are no symptoms, observation and monitoring of the speed of growth is usually sufficient.

There are currently no preventative guidelines to reduce the risk of orbital tumours.

The mission of the Neurosurgery Department is to guarantee excellence in care, education and research, with an international outlook. We have a particular focus on the needs and preferences of patients with diseases of the nervous system that require surgical treatment.

At the Neurosurgery Department, we apply the most advanced technologies and a multidisciplinary approach in a context that allows us to train neurosurgeons with strong ethical and moral values. All this, as part of the public health system that is accessible to all citizens. 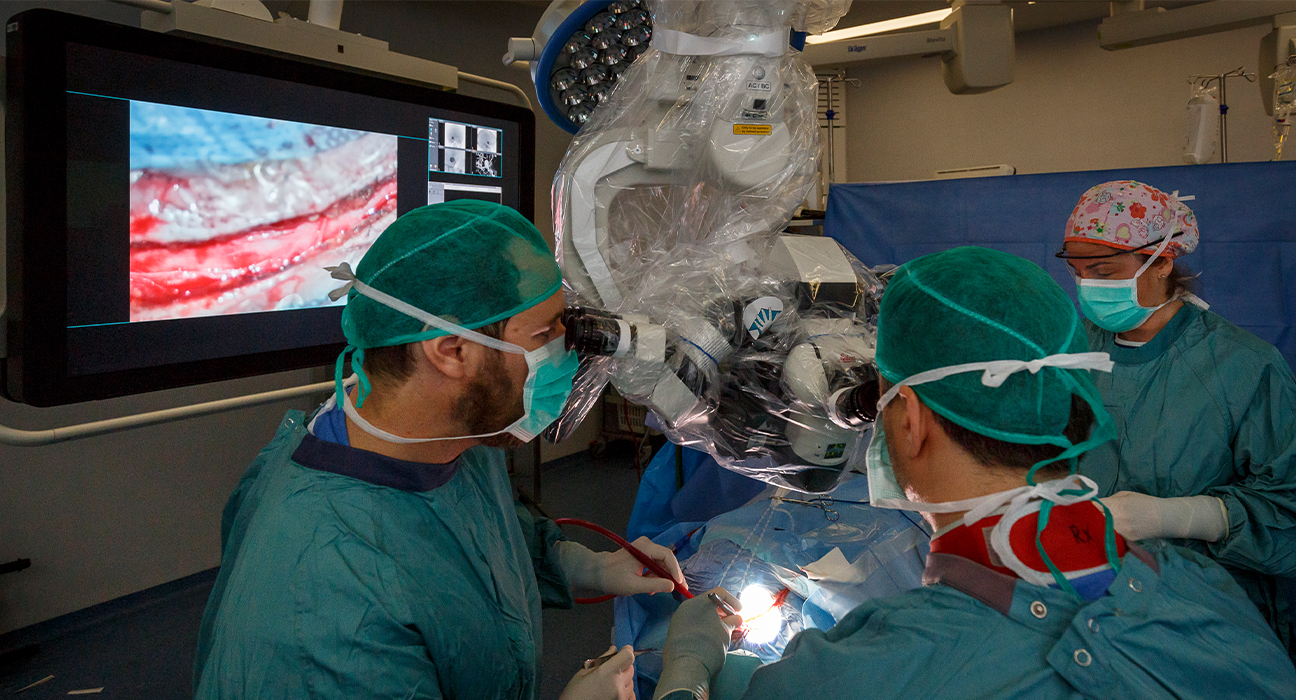 The Neurosurgery Teaching Unit is led by the Neurosurgery Department, with participation from Neurology, Pathological Anatomy, Clinical Neurophysiology, Intensive Care and Neuroradiology.

Why specialise at Vall d’Hebron? 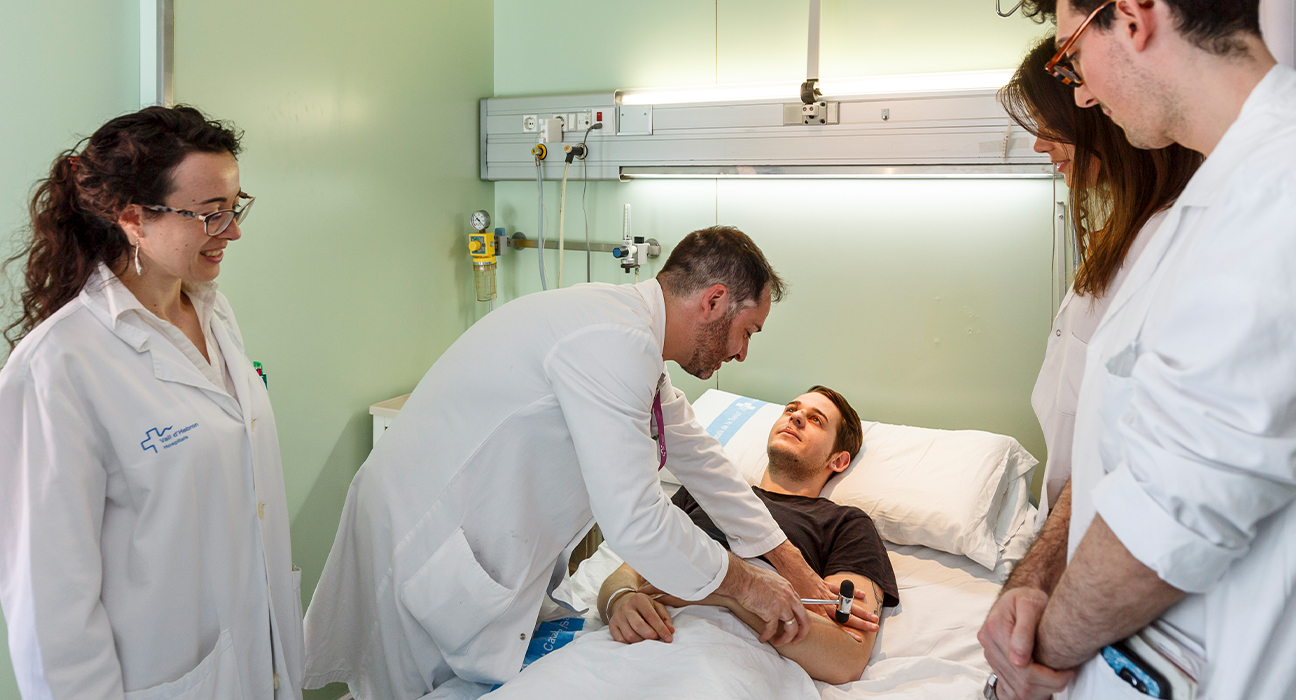 Healthcare activity in neurology combines writing medical histories, diagnostic data collection, correct use of complementary exploratory procedures, and accurate clinical and aetiologic diagnosis, as well as choosing appropriate palliative treatments. We also emphasise the role of the relationship between resident doctors and patients in the basic areas of Neurology.

A large number of medical conditions and neurological illnesses  can result in critical  emergency situations, such as strokes and lupus. With this in mind, from the second year the duty shifts in neurological emergencies become a key aspect of residents’ work, and are always carried out under supervision. Neurologists are also required to carry out a rotation in neurological outpatient care.

Research studies  are part of the practical work that neurologists must deepen and develop, with particular emphasis  on ethical competence  when carrying out research.

Neuroscience research should be done under supervision of a tutor , and requires solid training in scientific methodology as well as in bioethics and scientific communication.

Why should I specialise at Vall d’Hebron?

Strokes are a medical condition caused by an alteration in blood circulation to the brain. This alteration is due to an artery becoming blocked (ischemic stroke) or the rupture of a blood vessel (haemorrhagic stroke), preventing blood from reaching the brain and therefore temporarily or permanently altering brain functions. When blood flow is impeded, the affected part of the brain does not get the nutrients and oxygen it needs. As a result, brain cells can die, causing severe after-effects.

For this reason, if a person is suspected of having a stroke, the Emergency Medical Service should be notified immediately by calling 112. Acting quickly is essential in order to minimise or eliminate possible after-effects. 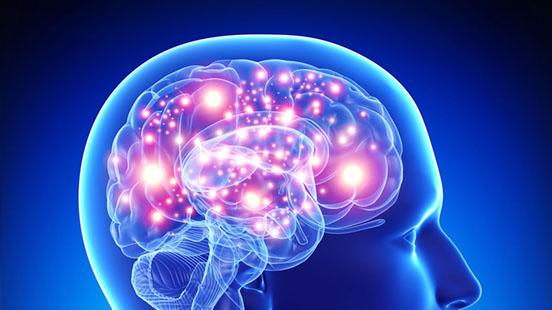 Strokes can be grouped into two broad categories depending on the reasons behind them:

When blood flow is temporarily interrupted (for between one and 24 hours), this is known as a Transient Ischemic Attack (TIA); however, if the duration is longer or the brain scanner detects necrosis (neuronal death), it is considered an ischemic stroke. TIA is a predictor of vascular disease and, in the case of stroke, is a warning that the person is at risk. In fact, 40% of people who suffer a stroke have previously suffered a TIA.

In the event of the sudden onset of one or more of the following symptoms, action should be taken quickly by calling 112:

Who can suffer a stroke?

Anyone can suffer a stroke, regardless of age and physical condition, although they are more common in the elderly. About 75% of cases occur in people over 65, although they increasingly affect young adults due to their lifestyle habits (between 15 and 20% are under 45). Strokes can also affect children: in Catalonia alone, 900 children live with a disability as a result of a stroke.

This disease can also be known by other names, such as apoplexy, cerebral vascular accident, seizure and thrombosis. In Catalonia, more than 13,000 people are admitted each year for a stroke and, unfortunately, they are not always reached in time to save the patient.

To determine the cause of a stroke it is necessary to perform a brain scan (CT). The scan can be completed by reviewing the condition of the cerebral and cardiac vessels, taking into account risk factors and chronic diseases presented by the patient. However, it is not always possible to discover the origin.

Knowing the cause of a stroke allows us to establish the most appropriate treatment to prevent it from happening again. Depending on the aetiology (cause), it can be classified as:

If a stroke is suspected, a neuroimaging test (a CT or MRI) should be performed as soon as possible, which will tell us about:

Specialists may request other tests such as a chest x-ray (performed upon admission as a first assessment), a doppler or transcranial duplex (to see whether there is a possible intracranial occlusion or stenosis, and where it is located), blood tests (to find out the status of risk factors, immunological and coagulation study, serologies, hormones, renal function, etc.) or a cardiological study (if a cardioembolic stroke is suspected).

After diagnosis, specialists may ask to repeat the tests to detect any changes by comparing the images, or request other tests.

Stroke treatment should be applied immediately, as rapid action can lessen the effects. However, a rehabilitation period is usually needed to eliminate or reduce possible after-effects.

Suffering a second stroke may have a fatal outcome. In survivors, it leads to an increase in the degree of disability and risk of dementia, as well as a higher rate of institutionalisation.

The impact may be different for each patient. Symptoms will be more or less severe depending on the area and volume of the brain affected, as well as the general state of health prior to the event.

In the case of a transient ischemic attack (TIA), which does not usually leave after-effects, or ischemic strokes, if the patient responds well to treatment, recovery is virtually immediate. At other times, the recovery is longer term and takes weeks or months, leaving some sort of after-effects.

There may also be a worsening of the patient due to neurological causes or complications such as fever, infections or others. In more severe cases, it can lead to death.

Once the patient is discharged, the primary care team takes responsibility for the patient, and will monitor risk factors and other chronic diseases. In complex cases, patients will need to visit specialists, such as neurologists.

The return home after hospital discharge will vary depending on the severity of the incident and the patient's family situation. Similarly, reintegration into daily life will depend on the after-effects experienced by each patient. 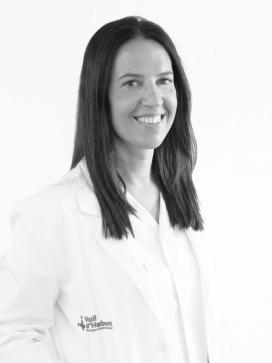 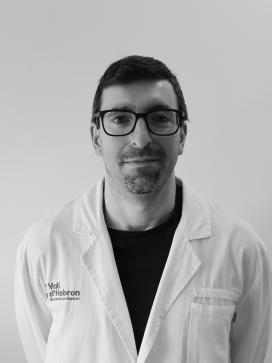