Early treatment by expert neurologists and admission to specialised units significantly reduces mortality and long-term dependence in people who suffer from acute stroke. It is essential, then, that if you suspect that you or someone else is having a stroke, you call 112 and follow their instructions to get treatment at the appropriate hospital.

It is also important to state as accurately as possible the time of onset of symptoms. If the patient is unable to give this information or has woken up with signs of a possible stroke, the start time will be considered the last hour he was awake and asymptomatic. 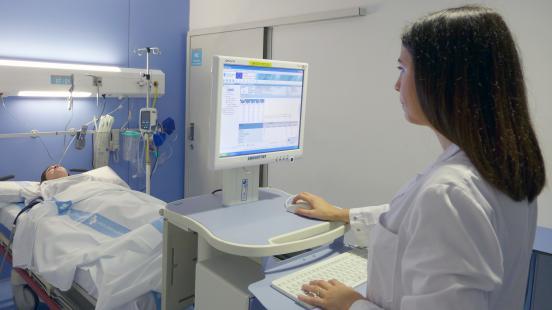 In the case of ischemic strokes, the purpose of treatment is to undo or remove, in the shortest possible time, the clot that is cutting off the natural blood circulation in the brain. There are two ways to do this:

In haemorrhagic strokes, the treatment aims to stop the bleeding that has been caused by the rupture of a vessel and prevent the increase in size of the haemorrhage. Therefore, regular monitoring of the patient is performed to gauge the level of consciousness and any neurological deficits. This is maintained for at least the first 72 hours after suffering a stroke. We also perform intensive monitoring of blood pressure, blood sugar levels and temperature to foresee possible complications.

Brain bleeding can cause inflammation of the surrounding brain tissue (known as oedema). If this happens, it is necessary to administer medication intravenously to reduce it.  In people who are being treated with oral anticoagulants or who have alterations in haemostasis (a process that the body performs to slow down bleeding), it should be corrected as soon as possible.

In more severe cases, specialists may recommend surgery to drain the bleeding. The decision on surgical treatment is made based on factors such as the location and size of the haemorrhage, age, and the patient’s medical history. This is a difficult decision as it is not always possible to access it without causing damage to other areas of the brain.

The purpose of neurorehabilitation is to regain lost or diminished neurological functions as a result of a stroke. However, there are phases of recovery:

The interdisciplinary team involved throughout the different stages works so that the patient has the maximum independence and adaptation to their environment.  To meet these goals, it is advisable to start recovery as soon as possible and, from the initial stages, foster the participation of patient and caregivers.

It should be mentioned that there is “Spontaneous recovery”: this is when the brain has the ability to recover from the damage it has suffered on its own. This recovery, however, may not be enough to reduce the sequelae. That is why it is advisable to always follow the instructions of specialists.

An interdisciplinary team deals with the recovery of a patient who has suffered a stroke. Each of the professionals acts according to the evolution of the condition and the needs that arise at any given time:

Other professionals such as doctors, nurses and orthopaedic technicians are also involved in the rehabilitation process.