Haemodialysis is an extra-renal filtration procedure that replaces kidney function using an external system. It acts as a filter for the patient's blood by connecting to the patient’s circulatory system via a catheter or by being directly inserted into the vein, usually in the arm. In other cases, an arteriovenous fistula may be created, connecting an artery to a vein beneath the skin on the arm. When an artery is connected to a vein, pressure in the vein increases, strengthening the vein walls. This stronger vein is able to withstand the needles used in haemodialysis and greater blood flow is achieved. 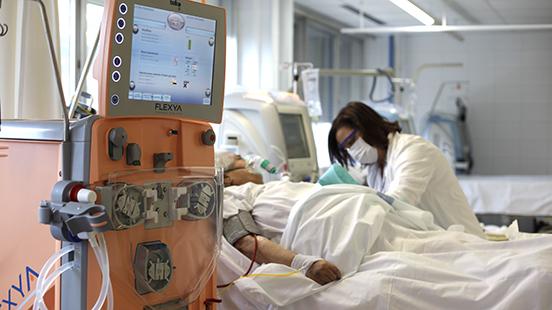 People with kidney failure starting a haemodialysis programme typically have less than 10% of normal kidney function. Above this figure, haemodialysis is usually not necessary.

Haemodialysis must be performed regularly in four-hour sessions, usually three times a week, although the duration and frequency will depend on the patient and their circumstances.

Haemodialysis is based on biophysics in the sense that the blood passes through a filter and exchanges substances with the fluid on the other side of the filter, which is circulated by a machine. The exchange gets rids of the urea, potassium, phosphorus and other waste substances that build up due to lack of kidney function. These substances partly pass through the membrane by themselves, as there are different concentrations of the substances and they tend to equalise, and is also due to the changes in pressure exerted by the haemodialysis machine.

Possible complications of haemodialysis are the infection of the catheter or being unable to find a viable vascular access site in patients who have had dialysis for many years.

Haemodialysis may continue for years, although it is usually an intermediate step between kidney failure and transplant.